Catching Up With Chickery's Travels

"Three years ago our youngest was in college. Sean was finishing up his 20 years in the Air Force," says Julie Chickery, half of the RVing duo, Chickery's Travels. "We were empty nesters, and Sean said, 'what about that RV we've been thinking about'."

That was about the time the couple bought a Heartland Cyclone and jumped head first into full-time RVing. Since then, Chickery's Travels have been making waves in the RVing community. They are prolific bloggers, have a successful YouTube channel, have published 2 books on RVing, and are cast members in the upcoming full-time RVing documentary, Open Road RV Nomads. While I was in Tampa at the Florida RV Super Show, I got a chance to catch up with Julie (Sean was away on business).

Although they've only been on the road for a few years, they've had their eyes on RVs for the better part of the last decade. "Sean and I have been looking at RVs since…our oldest is 25, and at least since he was a young teenager…so like for 10 years," Julie recalls. "There was never really a 'right time' because we have three boys, 2 years apart. They were so active in sports and band and everything else that we were like 'why buy an RV when we're not even going to be able to get away for one weekend'. We could never even be at the same activities together."

Eventually, the kids grew up and moved out. With all the kids out of the house, Sean and Julie began seriously shopping for an RV. "We thought for sure we wanted a Class A or a Class C," Julie says. "I think, just because those were the kinds we'd been in before. My dad had a Class A, and I had an aunt who had a Class C."

"We were at a dealership waiting to see a Class A, and someone was in it at the time. The salesman said, 'why don't I just show you a fifth wheel for something to do while we're waiting'," Julie continues. "We went in a fifth wheel and said 'woah! This is like a condo. Oh my gosh. You could live in this!' And that's when the idea spawned to actually live in it. At that point we were just thinking of a little weekend kind of deal."

"So that planted the seed," says Julie. "Then we went to the Hershey show, and we found Heartland. And we fell in love with all the ones that we saw. We were still also maybe thinking a Class A, but we had a Harley trike. When we saw the Cyclone, that was it. For sure, we were getting the Cyclone."

It wasn't long after finding Heartland RVs at the RV show in Hershey that the Chickerys bought their toy hauler. "We were down in Florida, stationed at McDill, getting ready to get out," Julie remembers. "We went over to Lazydays, and they had - it was new at the time - the one with the side patio [Cyclone 4200]. And we thought, 'yeah, that's it.' And we love it."

"We're different than a lot of full-timers because we were both working full-time at the time, both remotely with a little bit of travel," Julie says. "Sean started a new job that has a lot of travel. I go with him a lot, and often we can't take the RV. Like, last week he was in California, this week he's in D.C. We're just not going to drive that many miles. So what we do, we stay at a place 2-3 months at a time. So we're only moving [their RV] 4 or 5 times a year."

"I quit my job to be able to travel more with him," she continues. "That's when I started the blogging and the YouTube channel." She says even if they don't travel in their RV, she does take advantage of the trip to come up with content for their blog and social media channels.

"It's been great, and living in it has been great, but we haven't really gone real far. In 3 years we've been to Virginia [their first big trip was to VA to attend one of their son's graduation. They stayed at a campground near Radford University not far from the Blue Ridge Parkway.], North Carolina, South Carolina, Tennessee - all of the southeast really. This year, we've been just in Florida, in different campgrounds, since June."

"There's really a lot to see in Florida. Some people, I read their blogs, and they've been to half the country, they've been all the way across the coast in one year. And I'm like, 'oh, I'm exhausted just thinking about that'."

Chickery's Travels have taken an interest in educating others about the RV lifestyle. Peruse their Pinterest page and you will find tips for RV maintenance, travel, finance, small kitchen cooking, and campground reviews. Their blog is incredibly well-organized and full of useful information. Their YouTube channel is on fire, reaching more than 1,000 subscribers in just six months. The couple have written two books: A Complete Novice's Guide to RV Water System's Preventive Maintenance, published last year, and the recently-released "Full Time RV Finance".

"Full Time RV Finance" breaks down financing the RV lifestyle into three parts. "The first is the purchasing process and saving money to make the purchase and not going into debt for it and how to be smart about that," Julie says. "The second part is how to earn income on the road. We both have been full-time remote employees in the corporate world, still getting benefits and retirement and health insurance while RVing. I talk a little bit, also, about contracting. For my employer, I switched from a full-time employee to a contractor. And then I talk a little bit about delving into the entrepreneurial world, trying to build a blog or other business. I interviewed people who have businesses on the road. The last one is saving money when you're on the road." 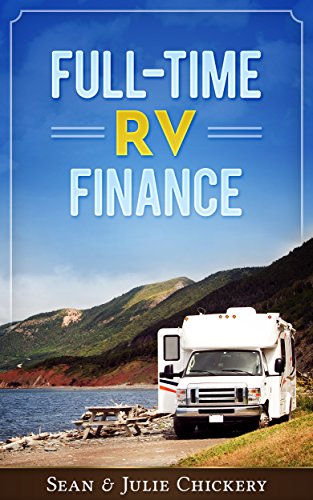 In the summer of 2017, Chickery's Travels announced that they would be cast members of the upcoming documentary, "Open Roads RV Nomads", along with fellow Heartland owners, Always On Liberty. "I saw something on Facebook that said there was going to be a documentary and if you were interested to contact Eric Odom, who is the producer," Julie says. "I put in an application, they replied to us and set up a Skype interview. A couple of days later, they called and said 'you're in'. I think we're a little bit different than a lot of the full timers, it seems like. They're either retired or they're very young, and they're either doing the entrepreneurial thing or they're putting careers on hold and just living really lean. We're a little bit older, but we're not retired."

The film is set to premiere this fall at a film festival-type event, Nomad Fest 2018, to be held in Wellington, TX, from October 18-22. "It's going to be like a film festival for nomads," Julie says. "And not just RV nomads - although that is the focus of the movie, 'Open Road RV Nomads,' - but Epic Nomad TV, that they're kicking off, they're going to have some people who bicycle across country. Apparently, there's a regular route for that that people do. They're going to have other types of nomadic people, not just RVers."

Epic Nomad TV, which Julie describes as "Netflix for Nomads", is a streaming service that will serve up all kinds of content related to traveling and the nomadic lifestyle. Chickery's Travels don't have plans to do a show for the network. They thought that might spread them a little too thin, at least while Sean is still working. However, 1st Class RV Adventures, a young family of four full-timing in a Heartland toy hauler, recently announced they would have a show on the network. I also interview them at the Florida RV Supershow this year. Stay tuned for another article on that.

In addition to the premiere of the documentary, Chickery's Travels have some plans laid for 2018 and beyond. "Well, so far, travel plans are we're going out to Texas for a few months because we have two sons that live out there," Julie says. "Also, Heath and Alyssa Padgett have the RV Entrepreneur. I'm going to their conference in February that they're having in Fredericksburg, TX. I'm really excited to go there and network with other people who do the entrepreneurial thing, build my blog and YouTube channel."

She says they also want to do some traveling in Europe in the future. Julie also says that once grandkids come along (their eldest son is getting married this summer), they may buy a small house ("I don't think we'd ever buy a big house again."), and go to part-timing in the RV. But they love their RV and have no plans of giving it up for good.

"We will be slowing down the RVing," she says. "We still want to keep the RV, but we might not be living in it. Because when I have grandkids I want to be near them."

I am the blog editor and a social media specialist for Heartland RV. I edit and layout blogs for www.heartlandrvs.com, and I create content for and manage social media channels for DRV and Cruiser RV.